In Rural Areas Without Pain Or Addiction Specialists, Family Doctors Fill In The Gaps
By: BRAM SABLE-SMITH

“Dr. Angela Gatzke-Plamann didn’t fully grasp her community’s opioid crisis until one desperate patient called on a Friday afternoon in 2016.

“He was in complete crisis because he was admitting to me that he had lost control of his use of opioids,” recalls Gatzke-Plamann.”

His struggle with heroin landed him behind bars; Here’s how he got clean in a Western Massachusetts jail
By Douglas Hook

“Allan J. Ryan has spent the past decade in-and-out of trouble with the authorities. His longtime struggles with drug addiction led him to present-day life inside the Franklin County House of Correction in Greenfield serving time for larceny.”

Please click here to read the entirety of ACLU letter addressing MAT services in regards to those in jail or prison. 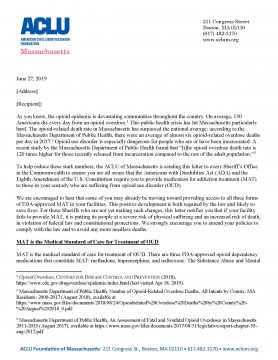 “To help reduce these stark numbers, the ACLU of Massachusetts is sending this letter to every Sheriff’s Office in the Commonwealth to ensure you are all aware that the Americans with Disabilities Act (ADA) and the Eighth Amendment of the U.S. Constitution require you to provide medication for addiction treatment (MAT) to those in your custody who are suffering from opioid use disorder (OUD)”

“In 1944, 36 conscientious objectors responded to a government brochure that asked, “Will You Starve That They Be Better Fed?” These healthy young men were brought into the corridors of the University of Minnesota football stadium. There, over the next 6 months, they were made to lose 25% of their normal body weight. They showed slowing of most physiologic processes, including basal metabolism and heart rate. The psychological sequelae were equally profound. They became obsessed with food and lost interest in sex and social interactions. They became irritable, depressed, and impulsive. One participant amputated three of his fingers with an axe.”

“In April 2017, the Massachusetts Medical Society voted overwhelmingly to support a concept that it acknowledged was “counterintuitive”: opening a center where people can inject illegal drugs under medical supervision.”

“OLYMPIA, Wash. (AP) — Every time she got out of jail, Jamie Cline started hustling again for heroin, driven by an addiction she didn’t understand.

“You want to get clean so bad. You know something’s killing you and you can’t stop,” said the 33-year-old who used heroin for 10 years.

This spring was different. While in a jail work-release program, she took a medication called buprenorphine. It quieted a voice in her brain that told her to keep using.

When she got out of jail, she headed for an Olympia clinic where a doctor is working to spread a philosophy called “medication first.” The surprising approach scraps requirements for counseling, abstinence or even a commitment to recovery.”

How the opioid epidemic evolved: A new analysis of overdose data shows when and where the three waves of drugs took hold
By Steven Rich, Meryl Kornfield, Brittany Renee Mayes and Aaron Williams

“Exclusive data – obtained by The Washington Post from the Centers for Disease Control and Prevention – shows how individual counties moved through the three waves of the opioid crisis: prescription pills, heroin and fentanyl. This graphic illustrates how the opioid responsible for the majority of overdose deaths shifted from 2011 to 2017 in more than 1,300 U.S. counties.”

“The Better Care Playbook helps you find the best in evidence-based practices and promising approaches to improve care for people with complex health and social needs. It is made possible by six leading health care foundations, and led by the Institute for Healthcare Improvement with support from the Center for Health Care Strategies. Not sure where to start? Visit the Playbook User’s Guide.”